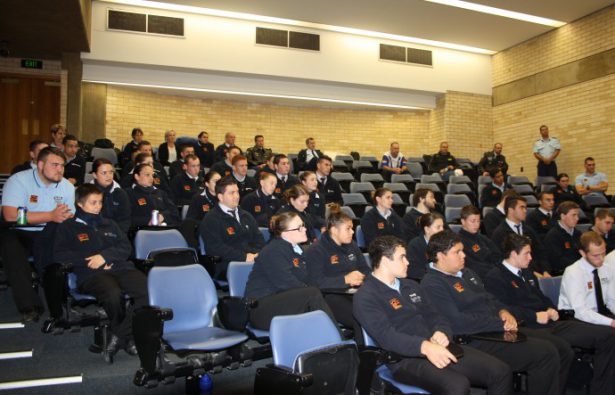 Ambition, accomplishment, and confidence were all predominant themes as a weeklong excursion involving Indigenous Police Recruiting Our Way (IPROWD) students came to a close at the NSW Police Force Academy in Goulburn on Thursday.

Forty seven students from all over rural NSW including Maitland, Wagga Wagga, and Tamworth came to the Academy as part of the IPROWD program and got a firsthand look in to the life of a police recruit, from lectures to menus.

“IPROWD is a pathway for Aboriginal people into the police force. And basically it’s a TAFE and NSW Police partnership with the Australian Government’s support,” says IPROWD Coordinator, Peter Gibbs.

“We work on an 18 week program where students gain their Certificate III and that gives them the academic qualifications to come into the Academy. Not only that, it provides this other knowledge, skills, and development that they’re also going to require to understand the job they’re aspiring to; there are so many different elements to it.” 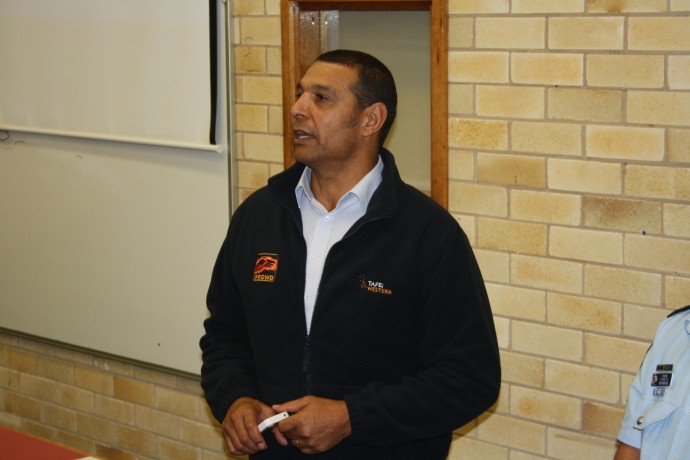 Beginning as a pilot program in Dubbo in 2008, then being rolled out all over NSW in 2011, IPROWD has so far provided a pathway for over 500 Indigenous Australians, 100 of whom are now serving police officers, to reach the academic level needed to enter the Academy as recruits and that number is constantly growing – something that will benefit Indigenous communities.

Living in the north west, NSW town of Brewarrina, Peter saw the already simmering racial tensions between the non-Indigenous police officers and Aboriginal community spill over, and riots that ensued, when Lloyd Boney, an Aboriginal man, died in custody in 1987.

Seemingly, not enough was learnt from the subsequent Royal Commission into Aboriginal Deaths in Custody – Peter’s own sister, Fiona Gibbs, died in gaol at Brewarrina 10 years later. With a riot against police looming, Peter decided that a positive was going to come out of his sister’s tragic and unnecessary death.

In Peter’s mind, the problem was obvious; more Aboriginal and Torres Strait Islanders were, and still are, needed in the force, so he put it to himself to make sure that more Indigenous Australians would get the opportunity to enter the force – hence the inception of IPROWD. 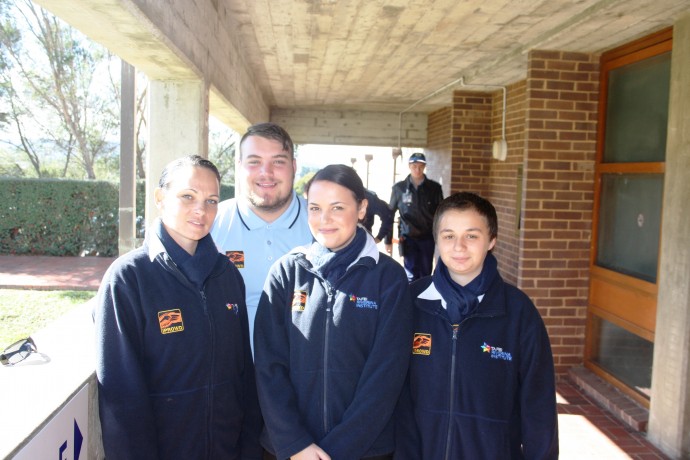 From left to right: Jessica Berg, Denise Marr, Dilan Bateman and Amber-Lee Higginson from Wagga Wagga were all part of the week-long excursion

“We need more police officers because, literally in our communities today, the historical relationship between the NSW police and our mob is there for everybody to perceive and we have many stories to demonstrate that it hasn’t been good,” he says.

“We need people to be able to make the link between our community and the job they’ll serve, and the only people who can do that is us. We are the people who come with the background, the knowledge, and the understanding of how to communicate with our people and be effective police officers.

“In the long term, you improve the relationship which hopefully will minimise police interaction with our people which reduces incarceration and that’s the big issue facing us: the social decline of our people – and we want to be a part of reducing that.”

One such IPROWD student who took part in the excursion and immersed herself in the role of a police recruit was 19-year-old, Laura Roach from Tamworth. Laura is hoping to join the Academy in January – which means she’ll be able to attest in August 2015 – to carry on the legacy of her father and brother. 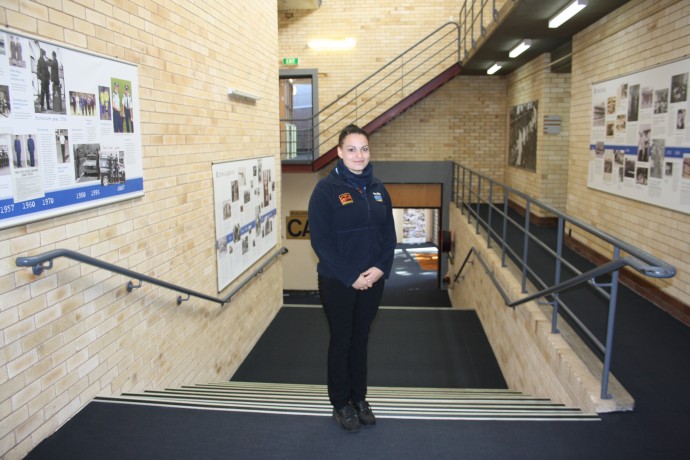 “My father was a police officer who was actually involved in an incident and got hurt severely with brain damage whilst off duty trying to fix an altercation down the main street of Tamworth,” she says.

“My brother followed in his footsteps, doing IPROWD in 2012 then attesting in 2013. Just following in both of their footsteps is great.”

On her path to becoming a police officer, Laura says that IPROWD, which she recommends “110 percent”, has been invaluable in helping her reaching her goal, which is ultimately helping her people.

“The gap between Indigenous and non-Indigenous is just ridiculous and I think having more Aboriginals in the police force will help in reaching out to the Aboriginal community and offer support and reduce the crime rate.” 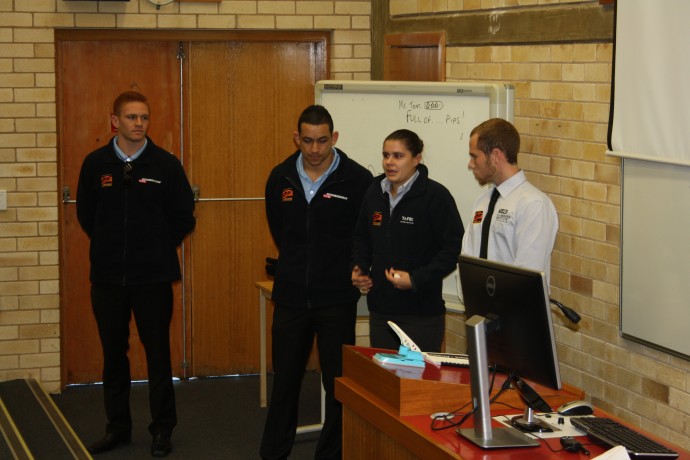 As the week drew to a close, groups reflected on their week in front of their peers and mentors

Laura expressed these desires, and more, at the last activity of the excursion – a reflection on their week, what they’ve learnt, and where they hope to go. Another young male cadet, who had similar objectives as Laura, knew what he wanted as soon as he entered the Academy’s gates.

“I think for most of the IPROWD students, this week was the decision week for us when we decide whether we want this or not. And for me personally, the second I walked through the front gate and saw the Academy I knew ‘yep, I’m in, sign me up, I want this, more than anything’,” he said in front of his peers.

He goes onto say that the highlight of his week was being invited onto the “hallowed” parade ground to march where “such distinguished officers” have before him. He then went on to reinforce major themes throughout the experience – drive and teamwork. 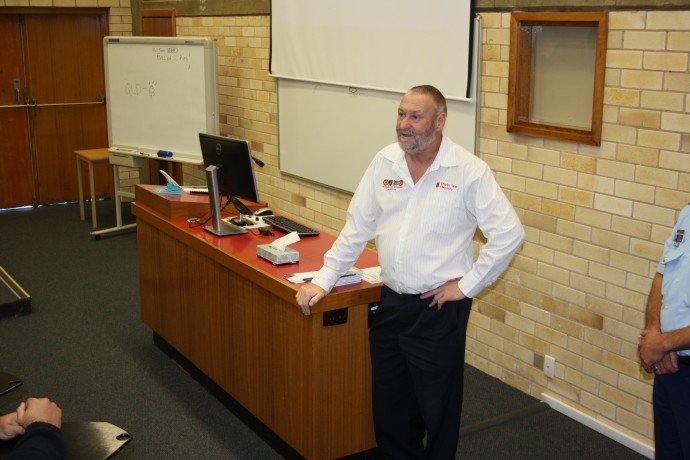 “If I’m going to take anything out of this week, it’s going to be motivation. After being here for one week I know, more than anything, that I want to be a police officer and I will stop at nothing ‘til I get it. I know, without a doubt, that if you guys want it as much as I do, you’ll get there too.”

Indigenous Student Support Officer, Rob Brown, concluded the week with a story in the lecture theatre, likening where the young aspiring officers are now to when he walked the Kokoda trail there and back but before him, Acting Principal of the Academy, Mr Peter Hinds, had a few words to say.

“We want you to continue on and become part of us. The ideal would to be to see every one of you on the parade ground in the future getting ready to come and serve two communities: your own Indigenous community and the wider community of NSW,” he says. 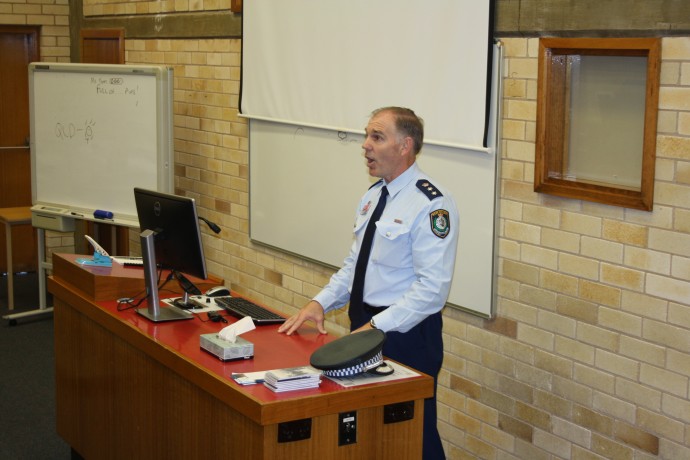 “You are getting in that situation where you can do some really good things for us and yourselves. Please peruse this opportunity and take every advantage that is offered to you and if you need assistance, we are here – both here in our location and the location you will go back to – to help you.”

Peter Gibbs stresses that there is tremendous opportunity for those wanting to become involved in the program and with current students ranging from 50-year-olds to mothers of seven, IPROWD is always happy to take on new members from all walks of life, given the passion is present.

“We want the bricklayer, the shearer, the person who’s looking for a career change – not just a school leaver. So we’re looking for all sectors of our community to be encouraged if this is their dream and that’s what we’ve been finding, many people have a dream that they wanted to be police officers and IPROWD gives them an opportunity to work towards it,” he says.

For more information on IPROWD and to apply, click HERE.